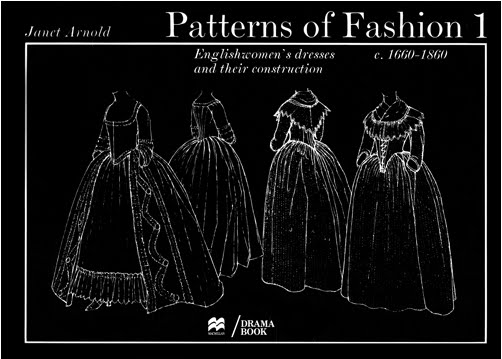 My best friend thoughtfully sent me “Patterns of Fashion 1″ by Janet Arnold for Christmas. I was very pleased when it arrived as it covers ‘Englishwomen’s dresses and their construction’ from 1660 to 1860, which of course includes the polonaise circa 1770-1785 – in fact it has two between pages 36-40.

The author, Janet Arnold is a well respected fashion historian who has written and illustrated a number of books on period costume. She has been able to study many items which are normally too rare or fragile to be handled often, including burial gowns such as Medici burial clothes from the 16th century.

My friend lives fairly near Snowshill Manor where some of the dresses studied in the book used to be housed as part of the Wade Collection.  2000 costume pieces, plus 22000 other objects ‘invested with the spirit of the craftsman and the age in which it was created’ were collected by Charles Wade from 1900 to 1951, when Wade donated the collection and the manor to the National Trust.

The Wade Costume collection can now be seen at Berrington Hall, Herefordshire where it is on loan.

Books and magazines, Museums and galleries